Budgets are a large part of where the rubber meets the road, so to speak, like tires on a car.  When you get down to looking at budgets, you’ll see what programs and initiatives have been prioritized for funding and where the resources are anticipated to come from.

At each level there are budgets: federal, state, regional, local governments, education districts, not-for-profit organizations, foundations, and more.  Keep in mind, there may be different start dates of fiscal years; for example, in federal government, many agencies operate from October 1st to September 30th; in county governments, many agencies operate from July 1st to June 30th; and non-profit organizations vary widely from calendar fiscal years, January 1st to December 31st, and almost everywhere in between.  Also, some governments operate on biennial cycles (2 years) and in the State of Oregon it goes from July 1st of odd number years to June 30th of subsequent odd number years such as 2015-2017 and 2017-2019.

Revenues: Where the Money Comes from by National Priorities

In 2015, $3.18 Trillion came in via Personal, Payroll, and Corporate Taxes, plus a few additional taxes.

Expenses: Where the Money Goes by National Priorities

In 2015, the US Government expected to borrow $583 Billion to make up the deficit (revenue vs expense), and paid back $229 Billion in interest. 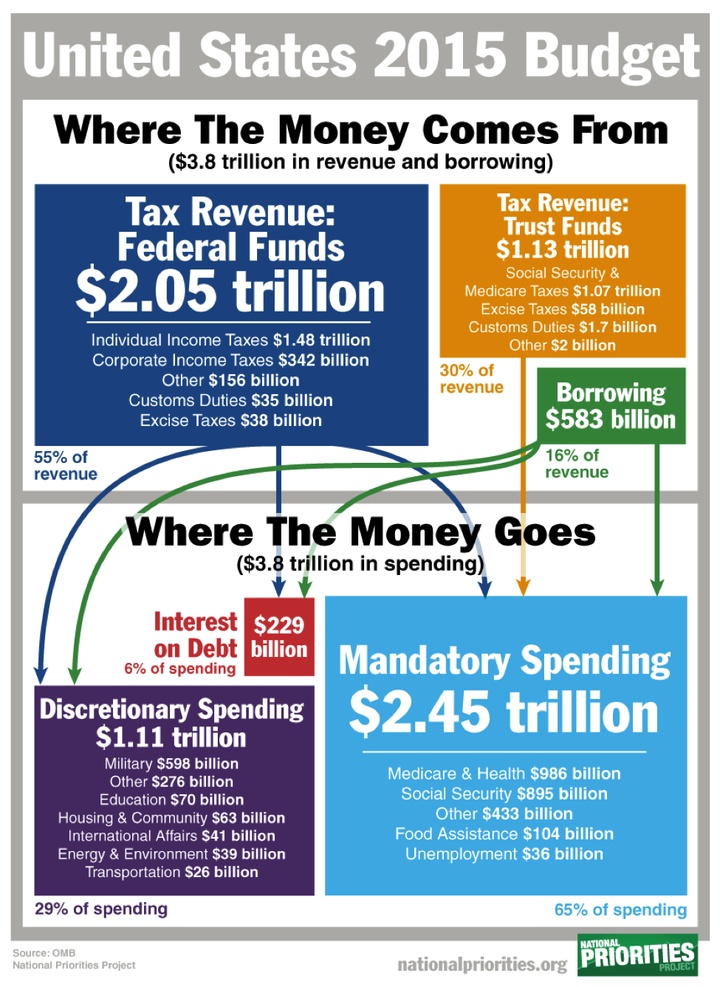 Nearly all states are required to have a BALANCED BUDGET.  For Oregon’s specific detail,

Ballotopedia offers insights regarding Oregon’s BUDGET & FINANCES including comparisons with other states,

For an overview of Oregon’s state BUDGET PROCESS,

For a VISUAL GRAPHIC TIMELINE of Oregon’s state BUDGET PROCESS, 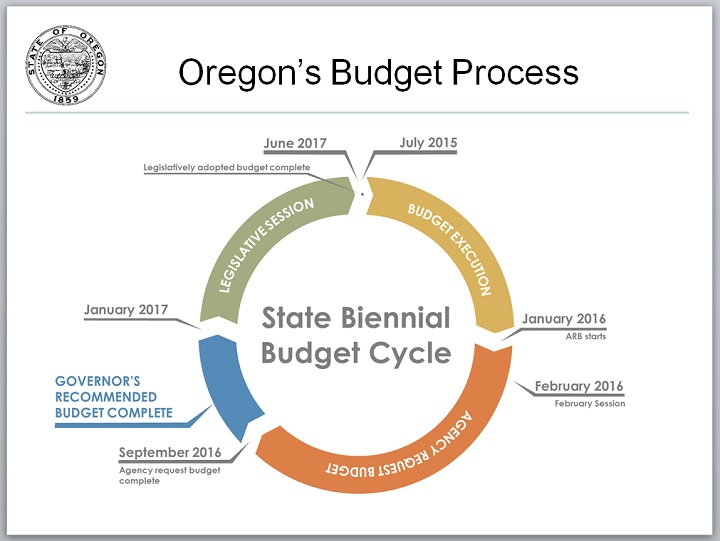 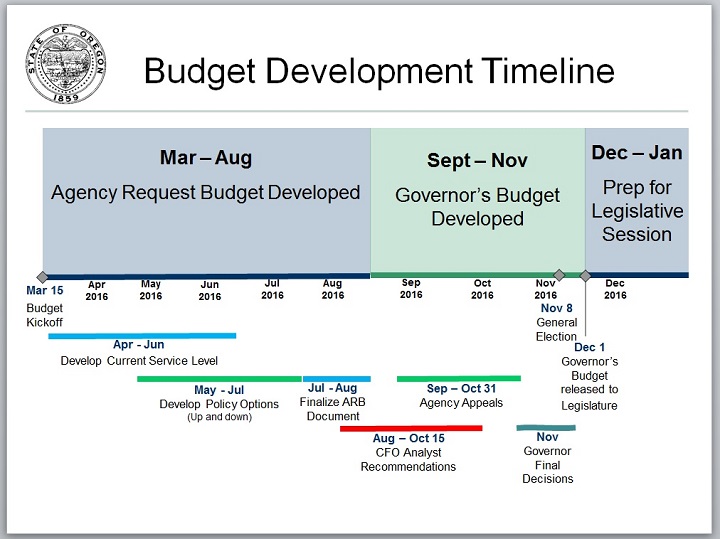 For details specific to the upcoming 2017-2019 BUDGET INSTRUCTIONS and plans underway,

For details regarding the LEGISLATIVE CONCEPT DEVELOPMENT SCHEDULE, 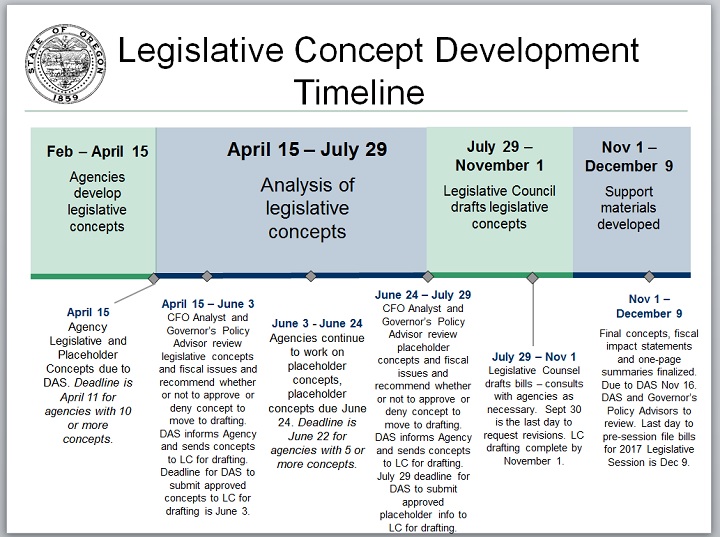 There are three (3) steps in the budget process:

The State legislature determines the final approved budget in its process every two years, called the LAB (Legislatively Adopted Budget).

Click here to view a chart with the breakdown of Oregon’s Biennial LAB (Legislatively Adopted Budget) by Funding Source. 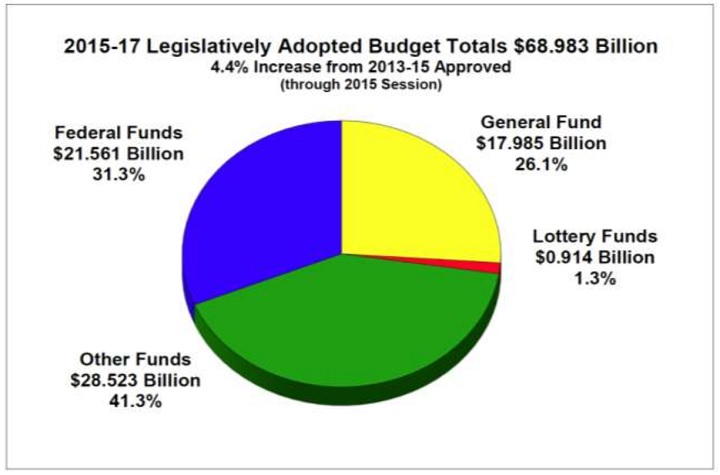 There are four (4) categories of FUNDING SOURCES in Oregon’s state budget including:

There has yet to be identified a single document detailing the specifics of funding sources within each of these categories, but here are some rough insights:

In terms of how the money is spent, there are various breakdowns.

Click here to view a chart with the breakdown of Oregon’s Biennial LAB (Legislatively Adopted Budget) by Program. 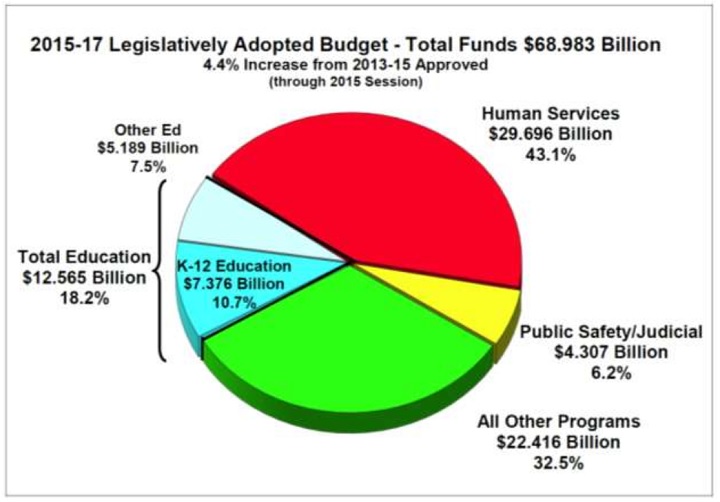 There are four (4) categories of PROGRAMS in Oregon’s Biennial LAB including:

In addition, the following End Balance Projections are noted:

At this time, the known data regarding Oregon’s MEDICAID spending is $6.8 Billion from October 2013-September 2014 (federal fiscal year).

At this time, the known data regarding Oregon’s MEDICARE spending is $4.9 Billion from October 2008-September 2009 (federal fiscal year).

This page is still under construction with ongoing content update needs.  If you would like to volunteer, please contact us by email: webmail ‘at’ UnitedVoiceForChange ‘dot’ org.