02/09/2017 OPDSCo will soon be announcing leaders for its steering and advisory committees.

02/08/2017 OCAC endorses recommendations for The Committee on Peer Standards and Peer Services as a guaranteed benefit for all persons receiving behavioral health/mental health services via Medicaid.

10/12/2016 NCMHR (National Coalition on Mental Health Recovery) forwarded the link to the US Dept. of Health and Human Services, Administration for Community Living whereby the NIDILRR (National Institute on Disability, Independent Living and Rehabilitation Research) is seeking comments during LISTENING SESSIONS (Public Meetings, Open by Phone) to guide its STRATEGIC PLANNING for the next 5 years. Comments accepted through December 12th 2016.  Read more…

10/12/2016 OCAC (Oregon Consumer Advisory Council) discusses the Oregon Performance Plan.  “OHA has also hired an independent consultant to assess OHA’s performance under the Plan. Pamela Hyde, the independent consultant, led the U.S. Substance Abuse and Mental Health Services Administration from 2009 to 2015.”  OCAC member(s) expressed a call for clear parameters communicated lest providers hesitate to use the billing codes for Peer Support Services (H0038) for fear of claims being rejected as experienced in the past when implementation was largely left up to local communities without certain state support.  The Olmstead Stakeholder Advisory Team will be revitalized in January 2017.  Cissie Bolinger invites people to contact her office to get these services up and running in local communities and to further review materials on the Oregon Performance Plan web page.  She will develop a clarification of the opportunities.  A request for stipends and transportation reimbursements and meals was expressed as well; Cissie said she would look into it.  She also mentioned how important it is to have solid data for review, including data in advance of initiatives 3 or so years down the road.  Those interested in applying for participation can contact Shawn Clark (shawn.clark@state.or.us).  Read more . . .

(NOTE: image will be replaced with clearer image when available). 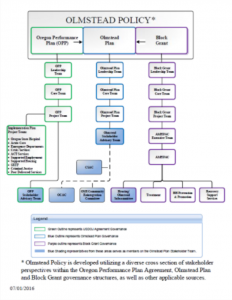